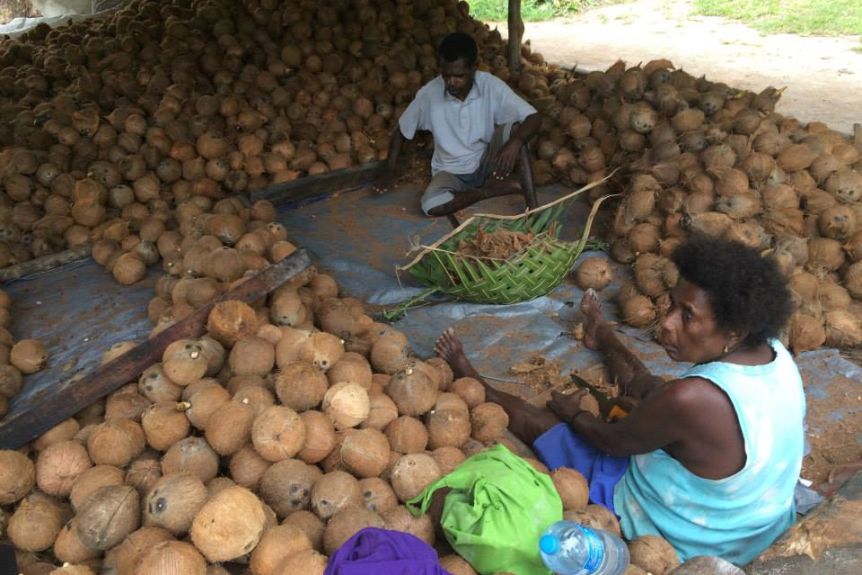 As his boat glided effortlessly into a tranquil palm-fringed bay on the west coast of Guadalcanal, Dan Etherington had no idea what would follow.

He was visiting Sumate, a typical coastal village in the Solomon Islands, where his work studying the economics of coconuts has started to have a profound impact.

As the boat touched sand, a blast from a conch shell broke the silence and four men wielding spears and axes came running menacingly towards Dr Etherington, his son Richard and grandson Chelsea Mosely.

It was a traditional warrior’s challenge and welcome, a ceremony reserved for the highest honour and a mark of the respect accorded to the 79-year-old Stanford University-educated economist and his family.

Dr Etherington has been visiting the Solomon Islands since 1981 when he was an academic and researcher at the Australian National University in Canberra, where he made coconuts his life’s work.

“As a cash crop, it has been so abused and as an economist I was concerned that you’re getting nothing for it,” he said.

“As one of the producers said: ‘God is raining money down on us and we don’t know it, we don’t recognise it.’

“It is a money tree but they were not actually getting value for the work that they did.”

In the first half of the 20th century, the Solomon Islands was a major producer of copra, the base ingredient used to refine coconut oil for soap production and for cooking oil, but war in the Pacific and health concerns about saturated fat saw the industry severely decline.

Copra is part processed at village level, where the coconut flesh is cut from the nut and dried on a rudimentary stove for refining overseas.

It is still a mainstay of the Solomon Island’s largely subsistence economy, but it is one of the most volatile commodity markets in the world and producers often work for little return.

Dr Etherington said copra production was a form of slavery.

It’s hot, hard, dirty work and the finished product is a poor quality oil that must be cleaned and deodorised after it is refined.

About 10 years ago he developed a system called Direct Micro Expelling (DME) for producing virgin coconut oil at village level.

It earns at least five times more income than copra and retains the coconut flesh or meal after the oil is cold pressed.

“They’re producing a beautiful oil and they have a residual meal they can use themselves for cooking, but they can feed their livestock, their chickens and pigs and that’s another asset, another thing that helps raise the living standards of the village,” he said.

In the DME system, the coconut flesh is ground and dried and then pressed with a simple low-tech device which Dr Etherington invented after experimenting with a caulking gun.

“What we’ve come up with is the fastest method of producing oil, from the time you open the coconut, till the time you get oil can be in under one hour,” Dr Etherington said.

His company Kokonut Pacific has installed about 40 DME systems in the Solomon Islands and says there is potential to supply up to 300 in the next few years.

The DME systems are worth $23,000, which is a fortune in a country where 85 per cent of the population still live from their own gardens and what they catch in the sea.

“That’s a problem — banks aren’t able to lend to people in villages, they don’t have security, financial records, so this is a major obstacle our industry faces, the financial entry barrier,” Mr Pollard said.

The Australian Government has been working with Westpac and the ANZ to roll out mobile phone banking technology in the Solomon Islands — particularly to rural women.

“We’re also working with the World Bank rural development program, which is giving people alternative sources of livelihood so they can raise a bit of capital, they can do things like start savings clubs and start to do things that we would consider normal basic financial services for the first time.”

Commissioner Byrne said investor confidence was returning to the Solomon Islands after ethnic tribal unrest crippled the economy at the beginning of this century.

The regional peacekeeping operation has been downscaled to training and advice for local police.

A virgin coconut oil industry could deliver important social and economic benefits for the Solomon Islands, according to Mr Byrne.

“Potentially it’s a really positive thing if this technology can give young rural people a source of livelihood that they wouldn’t otherwise have in their village,” he said.

“It reduces the incentive to drift into places like Honiara where often they’re unemployed, they’re hanging around unable to find employment here and become frustrated and turn to things like alcohol and crime, so potentially it has a really positive social impact right across the country.”

The company is run as a social enterprise and has sold its DME technology in a dozen other countries.

“We’ve only got five shareholders and they get enormous rewards out of the success of what we’re doing, rather than look for dividends, you get better dividends elsewhere but we’ve been very profitable and it’s those profits which enable us to grow,” Dr Etherington said.

The company has been riding a surge of popularity for coconut oil products, which has challenged the advice of national dietary guides in countries like Australia and the United States, which continue to recommend limited consumption because of links between saturated fat and heart disease.